Book: A treatise on the theory and practice of landscape gardening, adapted to North America,1841
Chapter: Appendix.V. Note on Walks and Roads.

Maintenance of gravel paths with a machine

The labor and expense of keeping the roads and walks clean, and free from weeds, in a place of large extent (and some of our seats have now several miles of private roads and walks within their own limits), is a very considerable item of the annual outlay of a country residence. At a recent visit to Blithewood, we saw in operation there a very simple implement, invented by R. Donaldson, Esq., the intelligent proprietor of that beautiful place, which promises to be of important service as a labor-saving machine in cleaning roads and walks. In Fig. 20 is shown a sketch of this implement, in use. In general appearance it is not unlike the frame of a wheelbarrow, except that instead of the two legs it has two iron bars, reaching down to the earth, and connecting with a transverse blade, about three inches wide, which is set nearly parallel with the ground. The handles of the implement are held by a workman, like those of the common double-tailed plough, while the horse which draws it is led or ridden by a boy. With this implement, which is three and a half feet wide, all the weeds in the space it covers are cleared from a road or walk as rapidly as a horse can walk forward, and it is only necessary to follow with a rake and remove the weeds, and the whole is in good order. On the lower portion of the upright bars, where they rise from the blade, there is an edge for cutting the turf on the sides of the walk, which performs its work very well and rapidly-the horse being carefully led; and it will, no doubt, answer perfectly for this purpose, in all those walks and roads not directly around the house, or where the greatest nicety is not required. The simplicity of this machine, the very small cost at which it is made, and the great saving of expense and labor which it secures will, we think, render it a valuable acquisition to all owners of large places, or to those wishing to keep up a long series of private roads and walks in the picturesque manner. For smaller gardens and grounds, where the most scrupulous nicety is observed, there is, of course, nothing that will supersede the common hoe, rake, and roller. 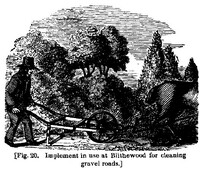