There are three liquid-manure tanks, in which the liquid matter, which in most farmyards is wasted, is fermented, and afterwards mixed up with soil for use in the kitchen-garden, or used in forming composts for particular plants. The liquid-manure from the stables is kept apart from that from the cow-house; and the general drainings of the yard, and of the frame-ground in the kitchen-garden, are fermented by themselves. The liquid manure with which Mr. Pratt waters his plants is formed chiefly of the sweepings of the pigeon, rabbit, and cow houses, with lime; and is kept in a cask in a close shed (60 in the plan Fig. 6, in p. 494, 495), so that the temperature admits of its fermenting in winter, as well as in summer: a thick scum rises to the top of the cask, and the liquid is drawn out from the bottom as clear as old ale. The plants which Mr. Pratt waters with this liquid are chiefly those of rapid growth, such as the Datura, Brugmansia, and other soft-wooded tree plants, which, like these, are cut in every year, and appear to profit by the stimulating effect of this manure. He gives it also, occasionally, to various other plants which appear to want vigor; but has not yet had sufficient experience of its effects, to give a list of plants to which it ought to be applied. 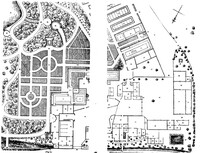