The art of making gardens began in West Asia and was brought to South Europe by the Greeks. Winters were colder in Europe but summers were hot enough to grow similar plants. Since Greek cities were generally on walled hilltops, and there was little space for horticulture, gardens were made in the valleys below the citadels. Towns were more spacious Greek colonial towns and it seems likely that the use of domestic courtyards for horticulture developed in Italy. The oldest good examples are the villa gardens of Pompeii.

Modern villa gardens in the Mediterranean countries (Greece, Italy, Spain, Portugal, Turkey) are made for the range of uses described by Pliny. Chief among them are: 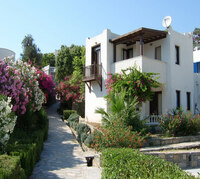