California is dubbed as "The Golden State", alluding back to the Californian Gold Rush. It is a diverse state where it is possible to ski and surf in the same day. From the glitz of Hollywood and the original Disney theme park - Disneyland, to the sophistication of Santa Barbara and the wineries of the Napa Valley, to the warm Pacific waters and the mainland US surf capital - Huntingdon Beach, California certainly has a lot to offer.

Real estate in California is relatively expensive compared to elsewhere in the US.

For information on horticulture in California.

Lake Tahoe is the largest alpine lake in North America. In winter, it is a very popular ski resort, in summer, it is a popular golfing destination. With Jeffery Pine Forests, grassy meadows, and a profusion of wildflowers, Lake Tahoe has a lot to offer hikers and nature lovers. The lake itself is famous for the clarity of its waters. 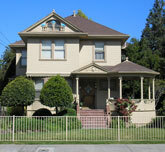