North Bank Thames Beach.  Thames bathing was popular with all classes of society in the eighteenth century. Laws against bathing were introduced after 1815 for reasons of indecency (men bathed naked) and the river became a foul sewer in the nineteenth century. Now, with the  water is cleaner every year, it will soon be fit for swimmers. In preparation for this glorious event, we can have sunbathing and knee-high paddling beaches beside the river. One of these beaches could be below Victoria Tower Gardens, facing east to the morning sun.

Sponsorship opportunities: Visitbritain – British Tourist Authority could sponsor the provision of comfortable chairs, and plants. They could be set out at low tide and moved as the tide comes in, or a raft could be used for a floating stack of deck chairs.

South Bank Thames Beach. The South Bank of the Thames needs a west-facing beach. It could be below the South Bank arts centre, looking to the afternoon sun. A raft could be used to store deck chairs and parasols as the tide comes in. The Tower of London children's beach opened on 23 July 1934. It was created by the Tower Hill Improvement Trust as a safe beach for the children of the local area.It declared that ‘Now, on this very spot where, in the Middle Ages the penalty for trespass was also death for man, woman or child, a safe playground for little ones is to be constructed.' King George V declared that the children would ‘have this tidal playground as their own forever’. Some 1,500 barge loads of sand were spread on the shore. Hundreds of thousands of kids used the beach - until it was closed in 1971, because the water was deemed insanitary.

Sponsorship opportunities: The Tower Hill Improvement Trust continues its charitable work as the Tower Hill Trust and could sponsor a South Bank Project as precursor to re-establishing the Tower Beach. Or the beaches could provide excellent publicity for a travel company eg Thomson or Thomas Cook 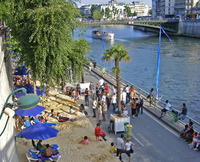 Paris-Plages ("Paris Beaches") is a series of temporary artificial beaches run along the Seine each summer. The roads are blocked off and used for sandy beaches and palm trees.

Tower Beach, used for paddling, bathing, swimming and sunbathing, was operated near Tower Bridge in London from 1934 to 1971 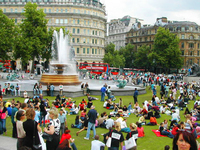 Trafalgar Square was temporarily grassed in 2007