London’s water channels are in need of a massive reclamation programmes, to bring them back to the condition when we can call them ‘rivers’ and 'landscapes'. We all look forward to the time when Nigel Barton’s , heart-rending book, The Lost Rivers of London (Barton, 1962) will be followed by its necessary sequel: How we won back London’s Rivers to be published by Nigel Barton IV in 2062. The principle applies to underground rivers, like the Westbourne and to surface rivers, like The Thames. As during the greater part of London’s history, and as painted by Canaletto, the Thames should be crowded with animals, small boats, traders, floating restaurants, flowerships and ferries. At present, it is managed by the Port of London Authority (PLA), despite its importance as a port being diminished by 99%. London’s river should be re-planned and re-designed with beaches and habitats on its banks. The Pool of London, once a great port, now almost dead, should be declared a Public Open Space and Nature Reserve, managed by a River Thames Landscape Authority instead of the PLA. For more information on river landscape planning see essay on reclaiming London's river landscape. 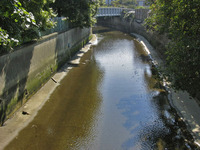 London's luckiest rivers are those which have not been buried alive 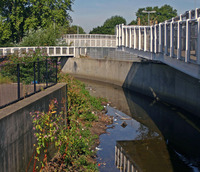 A classic London river - in a concrete jacket