College Garden is the former infirmary garden of Westminster Abbey. It has cultivated for at least 900 years but has rather a Victorian character, though some medicinal herbs are still grown. Formerly, it was also used to grow fruit and vegetables. The oldest trees are the five Platanus x hispanicus planted in 1850. The oldest built feature is the 14th century precinct wall at the far end of the garden. Part of the garden should be returned to its ancient use. There would be something very pleasant about finding land in use for herbs, fruit and vegetables in Central London. Choice fruits could be placed on trestle tables for visitors to sample. As noted elsewhere, Europe has no examples of surviving medieval planting and few examples of re-created medieval planting. 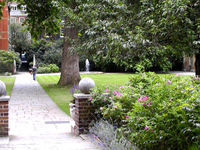