Well Hall has a Tudor Barn and in the sixteenth century Well Hall was the home of William Roper, Sir Thomas More's biographer. The house was rented to Edith Nesbit (the children's author) in the 1930s and was visited by other authors, including Bernard Shaw and HG Wells. In 1930, as Eltham became engulfed by housing on garden city lines, the estate was sold to the local council and became a public park laid out in an economy version of the Arts and Crafts Style.

The park was neglected for financial reasons during the last quarter of the twentieth century but received approx £2m from the Heritage Lottery Fund for a 2000-2 restoration progarmme. Scott Wilson were the landscape architects and did a very competent job. The area round the Tudor Barn certainly merited restoration. The same can hardly be said for the economy Arts and Crafts public garden. It was little used before the restoration and remains little used.

One possibility would be to enlist the help of a Friends of the Garden volunteer programme of the type which supports so many American public gardens. There are many keen gardeners in Eltham and, given the same funding, could probably do a better job of the planting design and maintenance than the local council. 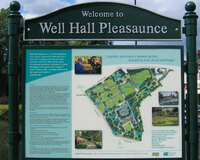 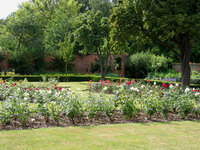 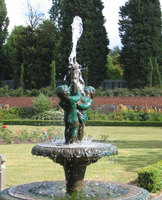