The former Bankside Power Station has been developed into the Tate Modern Art Gallery and a bridge built over the Thames to St Paul's Cathedral. The area has become one of the foremost tourist destinations in London. But so much money was spent on the gallery conversion that hardly any was left for landscape design of the area between the gallery and the river. A fresh green space was designed (1999-2000) by the Kienast Vogt Partnership in association with Charles Funk Associates (see the designer's account, below). But the expanse of bitumen macadam blacktop between the green space and the river is appalling. It is a disgrace to London. It is an insult to the city's visitors.

The gardens are important topographical sites that mediate between the space of the city and the building. The gardens blur the distinction between inside and outside. Thus the entrance ramp is a salient feature of both the gardens in the west court as well as the turbine hall. The plaza that spreads out between the riverside promenade and the chimney extends into the turbine hall where it becomes the platform. The area along the river, Bankside Gardens, is divided into three: a central plaza, framed by birch trees; to the west the arboretum, a lawn dotted with groups of birch trees, which offers a place of rest and repose; and the east gar­den, with its smaller groups of birches, a transition to the domestic scale of the adjoining buildings. The gravel surface, used throughout, is loose, bonded, or rolled into the asphalt. The soft texture of the gravel links the plaza with the lawns and, at the same time, suggests an extension of the riverbank.

The groves of domestic birch trees resemble the wooded growth along riverbanks. But birches are also pioneer trees that thrive on fallow urban and industrial lands and therefore symbolise the transformation of abandoned terrain.

The landscaping of the West Court mediates between the expansive, open area of Bankside Gardens and the framed spaces of the South Terraces. The ramp leading into the turbine hall is placed in the centre. To the north, in front of the cafe, outdoor seating on a stepped slope is marked. by groups of birches.

The South Terraces are divided into two defined gardens surrounded by hedges. The introspective, contemplative character of these spaces invites visitors to rest or play. The hedges , coniferous yews, white flowering quince and white apple blossom shrubs blossom in different seasons. Maples, lindens and plane trees along the south border, together with the topographical design of the lawns, heighten the spatial effect. Thousands of yellow and white daffodils bloom on the lawns in spring. They are planted in squares, but this geometry will fade in years to come.

Bankside, on the south bank of the Thames between Blackfriars Bridge and Southwark Bridge. 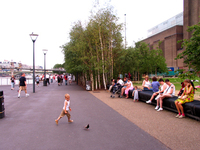 A child chasing a pigeon is the main interest for visitors, sitting 'on the riverfront' with the Tate Modern garden behind their backs. 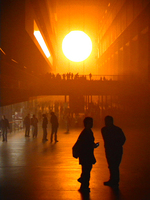 The Tate has created magical scenes within its Turbine Hall, like Ólafur Elíasson's Weather Project.