Sutcliffe Park - an example of good landscape planning in Greenwich

Sutcliffe Park used to be known as Harrow Meadow, through which meandered the Quaggy on its way to the Thames. It was a boggy area because the river flooded. So the local council put the River Quaggy in an underground channel and made a park, opened in 1937 and named after Mr Sutcliffe the Borough Engineer who organized the crime. In 1990 the National Rivers Authority (NRA) - now the Environment Agency - suggested aggravating the crime by putting the whole river in a concrete culvert. The Quaggy Waterways Action Group (QWAG) campaigned against this idea for 5 years and the Environment Agency agreed that an alternative plan would be to convert the dreary expanse of playing fields made by Mr Sufcliffe back into a flood meadow. The work was carried out from 2003-5, Greenwich Borough Council demanding compensation for the loss of its scarcely-used playing fields. It is marvellous that a short section of the river has been brought back to life - an excellent example of landscape planning. The wild flowers are terrific. The design is satisfactory, but less than brilliant. Part of the problem is that not enough water is kept in the ponds, presumably because the engineers wish to maximise the flood storage capacity. There as also been an excessive concern for safety - the area should be classified as 'countryside', with all its risks and rewards, rather than 'children's play area' with its proper regard for safety. But the park design is a great success. The landscape design was begun by the National Rivers Authority and completed by its successor body, the Environment Agency. It is part of an extensive restoration and flood relief plan for the River Quaggy.

The landscape architect's reclamation plan . The culverted river ran (and, in part, still runs) under the footpath on the east and north sides of the park. 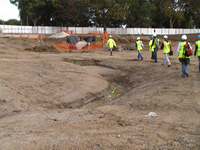 2003: the river course is reclaimed