The restoration of London's public parks has received generous funding from the Heritage Lottery Fund (HLF). The HLF's work in this area is summarised in a downloadable .pdf document: Parklife.pdf. The second paragraph of Parklife (undated but downloaded in 2006) is as follows: "Little has really changed about the way we love parks. In their roles as social meeting places, sporting places and uplifting gardens, they have played an important part in developing our national character, and are the envy of visitors from other countries which lack this green and pleasant inheritance." Discussion of this statement would be simpler if the phrase 'the way we use our parks' was substituted for 'the way we love our parks' but in either case the remark that 'little has changed' is woefully ill-informed. Yet it forms the basis of the entire HLF public park funding programme. It is rather as if a general from the First Boer War had lived to remark, in 2006, that 'Little as really changed about the way an army fights'. With regard to parks, any sociologically respectable comparsion of the situation in 2006 with that in 1880 would have to note that:

It would, therefore, have been much better for the HLF to fund a programme of public park renewal, not public park restoration. One can, however, see how the mistake was made. National Lottery Funding was also available for sport and it was probably thought this would cover active recreation in parks.

In London the HLF has contributed funding towards restoring of the following parks, gardens and open spaces: 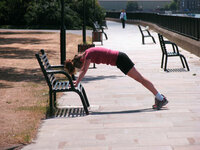 An office worker using a public park at lunchtime. She is not sitting on the park bench. She is sweating.

A London park in 1885: ladies, gentlemen and the aspirational working class have come to rest and take the air.