Paternoster Square is immediately north of St Paul's Cathedral in the City of London. The area was bombed in 1942 and re-built after 1961 to a plan by William Holford. It then became famous as an example of bad urban landscape design. Tenants began to leave and in 1996 the buildings were demolished and the area re-built to a design by William Whitfield. Extensive use of stone as a building material was welcome but the scheme has few other virtues.

The architecture is banal, if traditional, and the spaces unrelieved by water, vegetation or comfortable seating. In winter they are cold and hard. In summer they are hot and dazzling. It is disappointing that so much debate and so much design effort produced such a dull urban landscape. The graveyard of St Paul's Cathedral, and its entrance steps, are far more popular with local office workers. 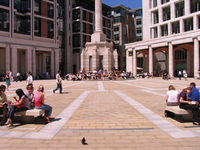 'Paternoster Column' (above) is based on a design by Inigo Jones for the West Front of St Paul's Cathedral.

Paternoster Square looks best from the air, making one wonder if the primary design aim was to offset the boring architecture. In Italy piazzas like this were designed as public markets and surrounded with beautiful buildings.