Parliament Square was designed by Charles Barry in 1868. The aim was to improve traffic conditions. This worked, but the square has always been an isolated patch of green. It has a visual role in providing a setting for the House of Commons, also designed by Barry, but it does not have a useful social role - because it is so difficult to access. Nonetheless, Parliament Square was included in the World Squares for All project - which led to the pedestrianisation of the north side of Trafalgar Square.

What should be done? 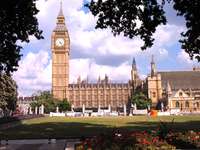