Painshill is one of the great eighteenth century landscape gardens, representing the Augustan phase of the serpentine style. It was owned and designed Charles Hamilton (between 1738 and 1773), set in a wooded valley. There is a lake, a Gothic temple, a Chinese bridge, a ruined abbey, a Turkish tent and a remarkable grotto.

Painshill was in such bad condition during the 1970s that the design had almost ceased to exist. The fishing rights had been let to a private club and there was no public access. The grotto a wreck and most of the planks on the Chinese Bridge had rotted away. It was then aquired by a trust. A landscape architect (Janie Burford) was appointed as manager. Funds were raised. Extensive historic reserach was commissioned and a restoration programme was implemented. It has been a great success but there are still issues to consider.

Painshill was designed as a rural retreat from the hurly burly of town life and a place to reveal an educated taste to one's friends. Today, the danger is over-commercialisation. Entrance fees are required to pay the bills but if the park has too many visitors it will become more like an urban park (eg St James's Park) than a rural retreat of various views. The use of bituman macadam blacktop to surface the main paths is a symbol of the risk. In England, this material is common in urban parks but is never used in gardens. 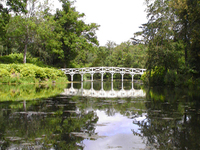 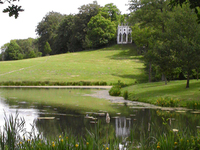 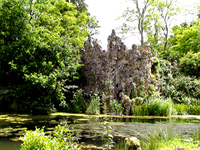