Terry Farrell and Partners were appointed in 1996 as masterplanners in 1996 for Paddington Basin . The strategy was "to open up the lands to the east of the station, centered on Paddington Basin" and "to re-establish the towpaths as public space around the full perimeter of the Basin" so that " the former 'backs' of sites have become 'fronts' – waterfronts" and "supported by first-class detailing of the public realm". The latter claim is debatable - good materials have been used in a bland way. The other goals have been substantially achieved. The problems lie elsewhere: 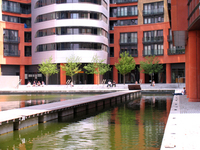