Alain Provost of Groupe Signes won the international competition to design the park in 1995. As the first largely post-modern design in London, it was a welcome addition to the capital's range of landscape architecture projects. The park has a fresh modern look with adventurous planting and a dancing waters fountain.

In plan, the design has a distinct resemblance to Alain Provost's competition-winning scheme for Parc Citroen in Paris. Both plans are dominated by a diagonal line slicing a rectangle. This geometrical idea is found to many of Provost's landscape designs - and was first seen at the French new town of Cergy-Pontoise ( where Derek Lovejoy and Partners were the landscape architects, in association with Alain Provost).

The Thames Barrier Park was funded partly by English Partnerships (a government development agency) and partly by the sale of land for a residential development on its western boundary. Unfortunately, it proved necessary to build a tough security barrier between the park and the appartments. This has diminished usage of the park and, except on the hottest days, one has the impression that the park is not in a sufficiently central location to attract the user numbers it deserves. As so often in London Docklands, a lack of good landscape planning at the outset of the regeneration project created near-impossible conditions for good landscape design - in the sense of making outdoor space which satisfies the Vitruvian design objectives (Commodity, Firmness and Delight) which also underlie the design objectives of landscape architecture. 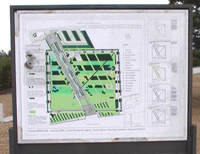