Newcastle Drawdock was built in the 1850s. In 1997 a landscape scheme was implementetd and a work of public art was installed. The landscape architects were EDAW, working with Tate Hopkins. The artist was Grenville Davey, winner of the Turner Prize in 1992. The Public Monument and Sculpture Association National Recording Project record is as follows 'A new park was laid out here in 1997, with remnants from a chapel which stood here until it was bombed in the Second World War. It also includes a plaque on the wall of a kneeling, mourning woman, and three commemoration stones [set into the ground?] dated 1862, 1878 and 1905(1).' 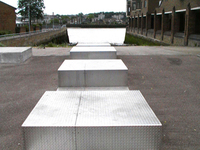 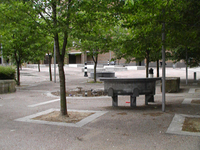