John Nash's great scheme for linking St. James's Park to Regent's Park was carried out between 1813 and 1820. It runs up Waterloo Steps and Waterloo Place to Regent's Street and Portland Place. Most of the original buildings have been replaced but the concept of a 'picturesque' processional route survives. Sir John Summerson sees the scheme as an application of Humphrey Repton's landscape theory to urban design. The theory was an urban application of the Landscape Style of estate layout, composed like a landscape painataing with a transition from a foreground, through a middleground to a background:

The scheme was one of the ideas which went to the making of Ebenezer Howard's book on Garden cities for tomorrow (1898). This came about through Howard's reference to Col William Light's plan for Adelaide, which drew from an admirer of Nash's work who described himself as a Friend of Australia. 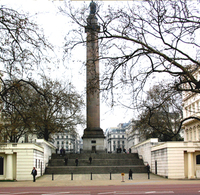 Waterloo Steps begins the transition from urban to rural 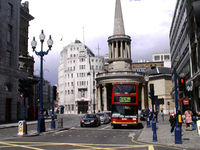 All Soul's Church forms a turn in the route, like a temple in landscape park 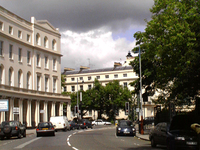 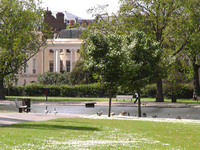