London's Mall came into existence as part of the landscape design for St James's Park. It was an avenue on the north side of the park used for the game of Pal-Mal. Many of the best urban designs derive from garden designs. The Mall was re-designed as a ceremonial route by Sir Aston Webb in the late nineteenth century. On Sundays and on ceremonial occasions it is closed to traffic and displays its true character. The pedestrian walks are, like equivalent places in Parks, paved with rammed gravel. It is kind to the pedestrians feet and gives character to the atmosphere. 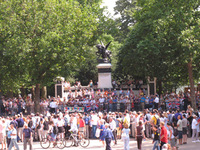 The Mall on a day of ceremony. 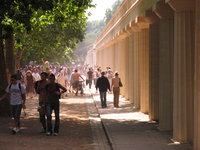