The idea of making urban squares derived from renaissance Italy and was explained by Alberti. It travelled to France (eg the Place des Vosges) and then to England. The first London Squares (e.g. Covent Garden, Lincoln's Inn Fields and Soho Square) were laid out in the seventeenth century and by the eighteenth century new squares were laid out as the norm in Mayfair, Bloomsbury and Westminster (e.g. Portman Square, Hanover Square, Cavendish Square and Manchester Square) and planted with forest trees and shrubs, creating the idea of residential squares. During the nineteenth century more planting took place and more squares were laid out (e.g. Belgrave Square, Eaton Square, Russell Square and Trafalgar Square). The great period of square building came to an end after 1900, giving way to the the garden city movement which favaoured informal street layouts. Many squares had their railings removed as part of the war effort in 1940 but most squares have had their metal railings reinstated since the 1970s.

In the twentieth centrury London squares, with their fine buildings, iron railings, plane trees and rich planting, have been seen as an ideal of civilised urban living. The following are of particular interest: Russell Square and Cadogan Square were originally designed by Humphrey Repton; Lincoln's Inn Fields is the oldest survivor; Trafalgar Square was designed in the Italian style by Charles Barry and subsequently embellished with lions by Landseer and fountains by Lutyens; St. James's Square, occupied by six dukes and seven earls in 1721, is still beautifully maintained; Cavendish Square was redesigned by Michael Brown after a perimeter underground car park was built in 1971; similarly Bloombury Square was redesigned by David Lea in 1972 but with a central underground car park (the plane trees were retained around the perimeter) Fitzroy Square was re-designed by John Brooks with a pedestrianisation scheme by Sir Geoffrey Jellicoe.

Garden squares are particularly well suited to London's climate, which is rarely very warm and rarely very cold. Let us hope their popularity will be revived. In the meantime, the building of office 'squares' proceeds apace in the City. Some are genuine squares, like Broadgate, and others, like Bishop's Square, use the name 'square' in a bid for popular support. The intrusion of wind or noise (as at Triton Square) diminishes the quality of a London Square. Office workers enjoy a sheltered place, like Mount Street Gardens. Peckham Square, in Southwark, was designed as a civic space. 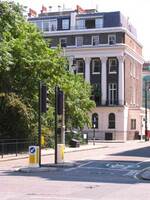