The first section of walkway running east from London Bridge towards Tower Bridge was known as London Bridge City during its development period in the 1980s. It was an empty zone at the time and 'city' helped describe the urban bustle which has since come to the area. It is now thronged with people, many of them making their way from the Tate Modern and Shakespeare's Globe to London City Hall and Tower Bridge. There are dramatic views across the river to The City of London. HMS Belfast, a veteran of the Battle of the River Plate, is moored in the river. Its nautical presence is welcome but this is the ancient Pool of London and it would be much better if the water was thronged with small boats, as when Canaletto painted it. The authorities, no doubt, will say 'It's not safe'. 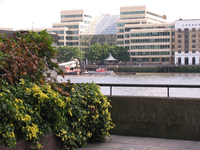 London Bridge City, seen from The City of London

The City of London, seen from London Bridge City