Hyde Park and Kensington Gardens comprise over 240 hectares and were once part of a royal hunting forest. The River Westbourne which flowed through the parks was dammed to form a lake. The east and west halves of the lake, known as the Serpentine and the Long Water are divided by a bridge designed by George Rennie in 1826. It has a magnificent prospect. Hyde Park has been open to the public since 1635 and demonstrates the value of a really large boldly planted park in a city. The great lawn is used for events. An excellent feature of the park is that horse riding is still allowed on Rotton Row (originally the 'Route de Roi' - William III's route to Kensington Palace).

A new rose garden, designed by Colvin and Moggridge landscape architects, was added in 1994. The rose planting is mixed with herbaceous planting creating a rich floral display of a kind rarely found in London's parks. The scent of the flowers is amazingly strong in June.

The large grass space at the east end of Hyde Park is used for events, including pop concerts. 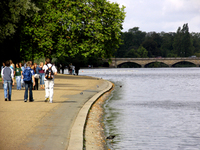 Rennie's bridge and the serpentine line forming the edge of The Serpentine and giving its name to the Serpentine Style of landscape design.

The rose garden by Colvin and Moggridge