Probably the best known of all the older cemeteries in the country because of its remarkable monuments, its air of romantic decay, and the presence of Karl Marx's tomb. In fact there are two cemeteries, one on either side of Swain's Lane. The eastern section contains Marx's tomb. David Ramsay was responsible for the circuitous layout of the western section which rises up the wooded hill to vaults and a terrace. There are spectacular sunken catacombs, known as the Lebanon Circle, and an Egyptian Avenue lined with vaults. Entrance to the western section is on appointed days only. Swain's Lane, N6. 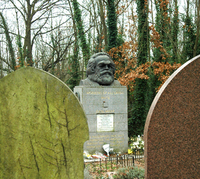