The land which now forms Greenwich Park was part of Blackheath until 1433. It was then enclosed to make a hunting park for Greenwich Palace. Le Nôtre drew a plan for a parterre in 1662 but did not visit the site. The remains of his formal avenues can be seen but his design has been overlain by subsequent planting in the English landscape style. The park is on a hill which rises behind Wren's Royal Palace. The hill is crowned by the former Royal observatory and there are wide views over the Thames and London. Between the palace and the river (King William Walk) a setting for the tea-clipper 'Cutty Sark' was originally designed by the GLC parks department. South of the park, on high ground, is Blackheath, an almost treeless expanse of grass with a fringe of Georgian and Victorian buildings. It was formerly a 'wild' heath, like Wimbledon Common, but has been reclaimed for playing fields. While visiting Greenwich Park, it is interesting to see William Kent's design for the Royal Barge in the National Maritime Museum (Kent also worked at Chiswick House).

Work on restoration of the avenues in Greenwich Park began in the late-twentieth century and there is every prospect of achieving a 2-in-1 design for the central area of the park:

But landscape architecture does not stand still. The south-east corner of the park is one of the best examples of the gardenesque style in London. And there is some scope for 21st century design in the park (eg the creative conservation of the diagonal path suggested in the caption to the photograph). See the historic garden restoration case study of Greenwich Park.

Blackheath is a former common which was taken over by the Metropolitan Board of Works and then the Greater London Council. It is now managed by Lewisham Borough Council (south of the A2) and Greenwich Borough Council (north of the A2). A landscape planning report was prepared by Kim Wilkie Associates in 2003 for implementation by Transport for London. The report recommends narrowing of the A2 to 2 lanes with a part-width reinforced grass hard shoulder for breakdowns and a shared cycleway and pedestrian path on the north side behind, a grass mound. 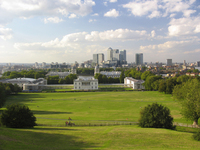 Le Notre drew a plan for the grass parterre in the middle of the above photograph, which is now used and maintained rather like a football pitch. There is a good case for re-designing the diagonal path across the parterre and for maintaining the grass as a fine lawn. Geoffrey Jellicoe believed the diagonal line disfigures the park geometry and suggested that it should be removed. But the alignment is older than Le Notre's design and, following the logic of Jellicoe's argument for creative conservation, an alternative case can be made for excellent modern design in Portland stone. The trashy macadam used on the path for half a century should most certainly go.