Green Park is smallest of London's Royal Parks. It is a stately place with a central avenue and informal groups of trees. The avenue centres on Sir Aston Webb's 1901 rond-point in fron of Buckingham Palace. Green Park's monumental gates were installed as part of his design to make London more like Paris - but behind the gates is a tranquil space for relaxing on the grass - and the Canadian War Memorial. It is a bronze water feature decorated with maple leaves - and used by children as a water slide in summer.

The valley of the former River Tyburn can just be detected in Green Park and one wonders if it will be brought back to life as part of the London Plan 2004 Blue Ribbon Policy. Lets hope so. 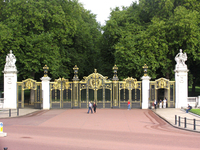 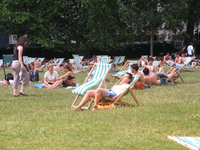