The London Cycle Network (see LCN Website)) is promoted as 'a network of signed cycle routes where cyclists’ needs have priority'. Some of the routes are good. But mostly, the LCN is a waste of paint. Too much money is spent on consultancy fees for engineers, stupid signboards, maps and road paint. Too little is spent in improving conditions for cyclists. See Why is the London Cycling Network (the LCN) a Mistake (though the author is over-prejudiced against dedicated cycle paths).

Another part of the problem is that far too little money is allocated to cycling. The bicycle is the Great Green Machine. London buses are bright red: they use hydrocarbon fuels and pump exhaust fumes into the faces of pedestrians and cyclists. Dedicated bus lanes are an environmentally extravagant use of road space and fresh air:

The pleasure, they say, is more in the travelling than the arriving. But cyclists get on their bikes for two distinct reasons:

London cycle planners have failed to distinguish the design objectives:

The resulting London Cycle Network is often the worst of both worlds: the routes are not sufficiently direct for commuters and not sufficiently attractive for pleasure. So they get little use. See comments on London Greenway Planning.

The Great Green Machine, at rest in a well-designed, but unroofed, cycle park: 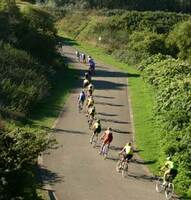 The cyclists' dream: Eastway Cycle Circuit. A veloway like this running into London through the Lea Valley could transport more commuters/rush-hour than 90% of London's roads 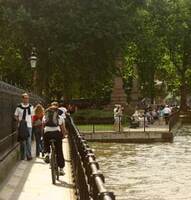 Cycling on the 1.5m wide walk in Greenwich: cyclists and pedestrians co-exist, through mutual courtesy (note also the pleasure of cycling near the mean high-water level, which is below the flood-defense level).

One of the stupidest cycle paths ever made, on the Isle of Dogs

Do they really expect cyclists to stop here? And if so, why?

The paint mark on the road does NOTHING to help cyclists