The space between the palace gates and the memorial was pedestrianied in the mid-1990s, with Land Use Consultants as the landscape architects.

The design should be regarded as a work in progress. One can understand the planners' desire for a pedestrian space which could still be used by vehicles when necessary and also on great ceremonial occasions - but they have ended up with a road people can walk on - not a true pedestrian space. The architect Terry Farrell, who claims the original idea for himself, commented that it had been implemented to the 'design of the municipal traffic engineer'. Now that the space has proved functional and popular it should be re-designed, allowing for vehicular use but using stone paving instead of bitumen macadam. The Mall was the scene of a great light show when Queen Elizabeth II celebrated her Golden Jubilee in 2002. Instead of a dull paving scheme this area could have lighting and fountains (like the Somerset House Courtyard), which could be adjusted as desired and, when unwanted, the light and water features would be invisible. People like to gather in front of palaces, as in the Tuileries Gardens. 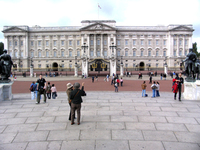 The space between Buckingham Palace (background) and the Victoria Memorial (foreground) is awaiting a re-design.

The Guards returning to Buckingham Palace