London's riverside landscape has been in flux throughout history. In celtic times the Thames was a broad swampy river with reed marsh on both banks. The Romans built the first London Bridge and a walled city (Londinium) on the north bank of the River Thames. The Saxon kings had a palace within the walls and the Normans made a royal palace at Westminster. During the Middle Ages the banks of the Thames were used as wharfs and for shipbuilding. With the renaissance, grand houses were built along the riverside in central and West London. Industry became the predominant riverside use, especially in East London, during the nineteenth century but this trend was reversed in the twentieth century as other means of transport came to the fore. Abercrombie's 1943 plan advised a trasformation of the riverside to amenity use. The 2004 London Plan included a Blue Ribbon Policy for extending this transformation to London's other rivers. But before contributing to this work, landscape architects and planners should walk or cycle along the Thames. They will find much good landscape planning but little good landscape design.

The Thames Path runs for 184 miles (294km) from its source at Kemble in the Cotswolds to the Thames Barrier in East London. The route was planned by the Countryside Agency in the 1980s. The London section of the Thames Path was proposed in the great 1943 London Open Space Plan. Depending primarily on its power to stir the imagination, work has been underway since 1943. The most dramatically successful section, between Westminster Bridge and Tower Bridge, has become the most popular tourist destination in London. The following plan is recommended:

Sitting on the boat, one might like to reflect on the following points concerning London's riverside landscape architecture and planning::

See comment on London Greenways. There are some problems along the riverside walk, which will surely be corrected in its next half-century: 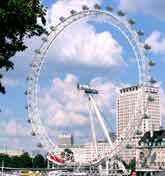