Towards a green strategy for London

Download a copy of Tom Turner's 1991 Report Towards a green strategy for London.

London needs a Green Strategy instead of a Park System. Figure 12 shows six theoretical alternatives for the provision of open space in towns, which were put forward by Tom Turner in 1986 (in a book on Landscape Planning). Option A has not been used in London, though it is represented by Central Park in New York. Option B shows the open space pattern which was created by residential squares in eighteenth-century London. Option C shows the hierarchy of open space which was put forward in the Greater London Development Plan. Options D and E show two different ways of creating networks of linked open space, based on pedestrianised streets and river valleys. Option F shows a web of interconnected open space, using pedestrian streets, countryside walks, signposted civic walks, and malls in shopping centres and business parks to create links between urban squares, commons public parks and riversideparks

An alternative to Diagram F, recommended in a report to LPAC in 1989 and published in Towards a Green Strategy for London (1991), is to plan a series of overlapping webs, instead of a single web. There should be separate webs for pedestrians, cyclists, equestrians, for flora and for fauna (Fig. 13). In places the webs would overlap, but each would have its separate identity and each would satisfy its own design criteria. This is a postmodern approach. There should also be networks of ‘scenic urban roads’, which are pleasure to drive along, and of accessible waterspace. In different parts, the layers could be publicly owned, privately owned, open to the public, not open to the public, ‘hard’, ‘soft’, single-use and multi-use. The series of overlapping webs constitute a ‘green strategy’, with ‘green’ used to mean ‘environmentally pleasant’, rather than ‘well-vegetated’.

The quality of open space

Llewelyn-Davies, in 1992, recommended a new approach to open space planning in the UDPs. It is based on the GLDP hierarchy, but the crude geometrical radii used to calculate areas of deficiency are replaced by detailed assessments of park catchments, taking the street pattern, access points, and severance into account. The consultants recommend that boroughs carry out full land use surveys to identify all open space, regardless of size, ownership or access, so that consideration and protection can be given to all open spaces, whether or not they are ‘hierarchical’.

From a theoretical standpoint, the most significant aspect of the Llewelyn-Davies approach is the emphasis on the quality of open space and on its structural role. All previous reports have focused on the quantity and distribution of open space. Quality may be considered both visually and in terms of facilities. A simple checklist of 25 possible attributes (e.g. ‘hilly topography’ and ‘attractive views’) was used to assess quality. It was found that some parks had only four attributes and others had twenty, but that overall quality was not related to park’ size. Many parks offer very few facilities in a detailed study of three boroughs it was found that more than 75 per cent of parks have a poor range of facilities LPAC emphasised the non-recreational roles of open space in 1990,27 but the boroughs pay very little attention to these roles. Llewelyn-Davies argue that, in addition to recreation, open space must be evaluated from the ecological, amenity, structural, educational, social and cultural points of view. At present;’even ecology and amenity receive limited consideration in only a few plans. 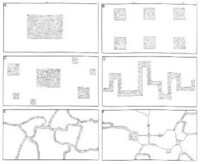 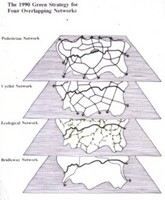