Strategic open space in the 1990s

At the time of the publication of its Strategic Advice, the London Planning Advisory Committee requested me to carry out a study of Strategic Open Space and Green Chains in London. The aims were: to produce a plan of Strategic Open Space in London, showing existing and proposed Metropolitan Green Belt, Metropolitan Open Land, Green Chains and Walks; to review the opportunities for developing Green Chains as strategic links between Londonâ€™s open spaces; to make recommendations concerning strategic open space planning in London.22

The survey of Green Belt found that the boundary of the Green Belt is slightly in flux, as some areas of land are used for development and other areas are added when it becomes apparent that they are of strategic importance. The survey of Metropolitan Open Land found that the total area of designated land is steadily increasing, as the strategic importance of various open spaces is recognised, and MOL comes to be valued as a protective category.

The three main elements of the named â€˜Green Chainâ€™ in South London (Fig.) are: (i) a series of open spaces, forming a chain, which have been designated as Metropolitan Open Land; (ii) a linking walkway which is signposted through the open spaces and also through the urban areas which â€˜interruptâ€™ the flow of open space; and (iii) areas of built development are included within the designated area of the chain, because further development could create opportunities to enhance the green chain.23

Considerable progress is being made with the development of other open space links in London which are akin to Green Chains. A survey revealed that there are 212 km of existing footpath and proposals for a further 333 km, of which 180 km will be riverside walks (Fig. 10). This will provide a total of 545 km of path, which may be categorised as follows: (i)the Green Chain Walk; (ii) Riverside Walks; (iii) Canalside Walks; (iv) Countryside Walks; (v) Civic Walks. The prime example of a civic walk is the Silver Jubilee Walk, which was established in 1977. A leaflet has been published and it is waymarked by means of stainless steel plaques set into the pavement. Pavement markers have also been used to give continuity to the Grand Union Canal Walkway above the Islington canal tunnel.

Current progress with the development of long-distance walks in London makes it opportune to reconsider the 1944 proposal for a web of interconnected public open space. Some of the links proposed by Abercrombie are no longer appropriate, as noted above, but there have been other changes in the pattern of urban life since 1944 which make it possible to consider new types of link. Canals, for example, have almost entirely fallen out of use as commercial routes. It is difficult for us to imagine that they were once rather dangerous privately-owned places, where it would have been dangerous for children to play or for adults to pass their leisure time. But canals now carry mainly recreational traffic and the canalside land is sought by property developers. They are excellent links between open spaces.

Another change is the greatly increased value put upon nature conservation. Strips of semi-natural vegetation beside railways, rivers and canals are now wanted. In 1944 such areas were thought to contain hazardous weeds. The â€˜Dig for Victoryâ€™ campaign led to the establishment of small allotments for vegetable cultivation wherever the strips of land were sufficiently wide. In 1990 the strips are seen as â€˜ecologicalâ€™ or â€˜biologicalâ€™ corridors. Strategic Advice noted that â€˜Continuous â€œbiological corridorsâ€ are as important to ensuring conservation of ecologically significant elements as the preservation of individual sites.â€™ The corridors could become part of a London-wide web of wildlife habitats.

The concept of pedestrian segregation has developed since 1944, when only a few urban paths were separated from roads. Segregated pedestrian paths remain a small proportion of routeways, but there are many more pedestrian subways and overpasses, pedestrianised streets, paths through housing estates, covered shop- ping centres, and pedestrian malls in business parks.24 These developments have created opportunities to use the new pedestrian routeways as links between open spaces. They are not â€˜greenspaceâ€™ in the traditional sense of â€˜vegetatedâ€™, but they are â€˜greenâ€™ in the modern sense of â€˜environmentally pleasant.â€™

A weakness of the 1944 proposal for connections between open spaces is that they were conceived as a â€˜parkâ€™ system. All the links were between parks. But very few journeys are from park to park. More are from home to park, office to park, station to park. And the majority are from homes to offices, shops, school bus stops and stations. There is every reason to plan these routes through environmentally pleasant space. Pedestrian links should be from origins to destinations, not from parks to parks. This would make â€˜green commutingâ€™ a popular alternative to mechanised transport. There should be an Abercrombie-style network of radial and circular walkways.

Journeys from park to park are most likely to take place in leisure time, and there is good reason to believe that they are more popular now than in 1944. We have many more sedentary workers with private gardens who wish to spend a proportion of their recreational time in active pursuits, including walking, jogging, cycling, and horse riding. Such activities require linear recreational spaces which cannot often be provided within discrete parks.

It is difficult to know whether cycling is more or less popular in 1990 than it was in 1944, but there has unquestionably been a resurgence of its popularity during the past decade, partly connected with the development of mountain bicycles for leisure use. There are more bicycles than cars in London, but joint use of road space is hazardous for both. The London Cycling Campaign has planned a 1000- mile (1609 km) cycleway network for London and the proposal has been adopted by LPAC.25 Much of it is planned on public roads, but there are many opportunities to incorporate parts of the network within parks and pedestrian streets. 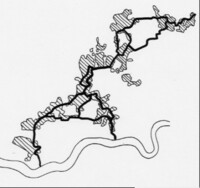