The City of London was built by the Romans and remained a walled city until the Norman Conquest of 1066. Having made the country safe, the Normans built a monastery and a royal palace  at Westminster - which was west of the walled city. In the sixteenth century Henry VIII acquired additional land which he used for Whitehall Palace, St James's Palace and St James's Park. When St James's Park was re-designed in the Baroque Style, by Charles II after 1660, Henry's royal parks (including Green Park and Hyde Park) became the core of what is now London's open space system. John Nash linked it Regent's Park, with a 'processional route' intended for the Prince Regent. John Claudius Loudon looked at London's open spaces in 1829 and proposed that the future development of London should take place by alternating rings of parks and buildings. Louis Napoleon and Baron Haussmann looked at London's open space plan and were inspired to build a network of avenues and parks in Paris. Frederick Law Olmsted looked at these plans and proposed aystems of parks for New York and Boston. The famous Emerald Necklace led to the foundation of the landscape architecture profession and to the International Greenways Movement. Olmsted's ideas, in their turn, influenced Abercrombie's great 1943-4 Open Space Plan for London.Something of this history is explained in these videos:

London has had great opportunities in planning its open spaces:

The obstacles to landscape planning in London have been: 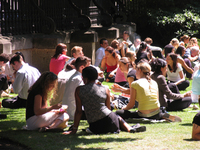 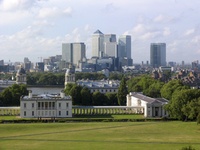 Greenwich began as a royal hunting park with a riverside palace

London is rich in residential squares. They were made for residents but many remain closed to the public

Park users should have a say in park design and management.