London as it should be: rich in roof gardens, parks and pools

London as it is being built: rich in towers, bitumen, thermoplastics and synthetic rubber.

London was hit by a great building boom after the Global Financial Crisis of 2008.  The reason seems to have been that the world's rich were scared of becoming the world's poor if they left their money in their own countries. Russians, for example, had invested in Cyprus and seen the Cypriot government giving their finances a haircut. Greeks feared their country would leave the Euro and the new drachma would be about as valuable as sweetie papers. Chinese fear their property bubble will burst. So they all wanted to buy London property. Many kept their properties empty - so what is the point of providing it with green roofs and living walls? There is none and London's 'town planners' were too over-awed by elected members to make a case for sustainable roofs. The video shows what has been happening to London skylines since 2008. Sad; very sad.

New York as it should be: rich in roof gardens, parks and pools 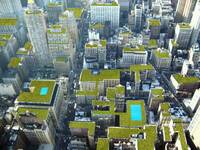 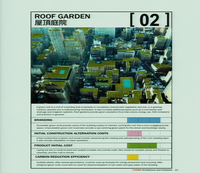 The above version of my image is a screen grab from a lecture by Moshen Mostafavi, on Ecological Urbanism, delivered to the Brookings Institute (on Thursday, February 21, 2013 in Washington, D.C.). The full video can be seen on Moshen Mostafavi's GV bio page. He seems to have got it from a Japanese website - and he is welcome to use it.