History and theory of garden design and landscape architecture > Garden and Landscape Books > Essays on Cities and Landscapes by Tom Turner - contents list > 3.9 Story patterns and narrative in design and planning

In the days when stories were passed on by word of mouth, from generation to generation, details became blurred and structural patterns were laid bare. Vladimir Propp initiated the structural analysis of wonder tales, or fairy tales, which others have taken up. An amazing worldwide uniformity has been found in such tales. Their themes are hope and tragedy. Paradise is lost and paradise is found again. Cinderella is a classic example. She lived in paradise until her mother died. Then came trials, tribulations, mysterious happenings and, eventually, a happy ending

In other tales, a young man sets off from home, encounters evil, remains steadfast, is helped by magic powers, passes tests, marries the king's daughter and lives happily ever after. Various elements in the stories have symbolic content. Wood depicts the wholeness of the primordial state; birds change into women; dark forests symbolize terror; animals represent instinctive forces; water may lead to a magic kingdom. Spiritual adventure is the subject of wonder tales. People identify comparable patterns in their own lives and discover more about their inner natures. Elements of wonder tales can appear in the physical environment. Scandinavian cities are filled with statuary but only one of them is world-famous: the Little Mermaid in Copenhagen (Figure 3.13). She was inspired by Hans Christian Andersen's tale of that name. She is beautiful in herself but it is her position on the water's edge, consequential upon the story and exposing her to sea, sun, wind, tides and frost, that so greatly enhances her appeal. She is the pitiful creature who rescued a prince, fell in love with him, died when he married a mortal and turned to foam. She is part of an exceedingly powerful pattern system. She is not, in the crude phrase that critics apply to misplaced sculptures, a turd in a plaza. 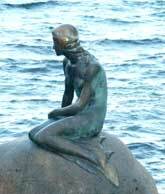 3.13 The Little Mermaid in Copenhagen is one of the world's most popular statues