The survey-analysis-design (SAD) procedure is an aspect of functionalism that is well known inside the design professions but poorly understood by outsiders (Figure 13.3). It would be advantageous if experienced planners and designers were to write about it, as Sturt wrote of the wheelwright's craft. Future historians will have to understand this procedure if they are to understand twentieth century cities. The SAD method of planning began with Patrick Geddes. As a scientist, a sociologist and a geographer, he was disenchanted with the engineers' and architects' approaches, which saw city planning as a technical exercise. Take the example of a new street. To the engineer, it was a traffic artery. To the architect, it could also be a visual axis. To Geddes, it should be a vital component of civic structure, affecting regional development, history, culture and everything else. Geddes therefore required a full survey and analysis as a prelude to plan-making. Undoubtedly, he was correct. The problems arose when SAD came to be used by less-enlightened people. Engineers were delighted with the SAD method. Before planning a new street, they surveyed and analysed the existing traffic. If vehicular flow was surveyed at twice the volume of existing street capacity, they doubled the size of the street. Similarly, architects surveyed the function of a building before producing a plan. This led to the notorious idea of a house as a "machine for living'.

Lewis Mumford, who admired Geddes, recognized Ian McHarg's Design with Nature (McHarg, 1971) as a scion of Geddes' Cities in Evolution (Geddes, 1915), and agreed to write an introduction to the book. In it, Mumford praises the empirical foundation of McHarg's ecological method:

He seeks, not arbitrarily to impose design, but to use to the fullest the potentialities -- and with them, necessarily, the restrictive conditions -- that nature offers.

As the ecological method rested on "imitating nature', McHarg was led to believe that "any man, assembling the same evidence, would come to the same conclusion' (McHarg, 1971). This is naked determinism, red in tooth and claw. Much as I admire Geddes, Mumford and McHarg too, this particular claim appears wholly misleading. The two excellent features of McHarg's method are his single‑topic analytical drawings and his Suitability Maps. Conventional Master Plans look to some point in the distant future. They are incomplete for a quarter of a century and out of date thereafter. McHarg's Suitability Maps are modest by comparison: they imply a desire to guide the future, not to exert control.

Landscape design is a form of artistic expression. Designers need freedom to explore the realm of the imagination... We believe the Billancourt project was a triumph for the use of metaphor... By abandoning the SAD method, the groups were able to determine the direction of their schemes very early on. Predictability was broken by taking this high risk route. Ian McHarg might have commented that "every group assembling the same evidence has come to a completely different conclusion'

Like John Dixon Hunt, they overemphasize the role of landscape design as a fine art. The above quotation highlights the role of metaphor and gives tertiary patterns a key role in the design process. This does not detach the process from the existing site but it does effect a considerable widening of horizons, towards the world of ideas. It also rests upon inductive logic at least as much as upon deductive logic. The relationship between the SAD and metaphorical approaches is shown by a comparison of Figure 3 with Figure 4. Both begin with the existing site, but only the SAD procedure is constrained by the existing site. The SAD procedure derives a design from a small input of information, because the design process is limited by the boundary of the existing site. Metaphorical approaches draw in more information.

Another problem for the survey‑-analysis‑-design method is that it does not accord with our knowledge of how designers actually operate. Schemes often spring into designers' minds at an early stage. After being recorded on the back of an envelope, or a wine-stained table napkin, the scheme is developed over months and years. The process is not linear: it follows different paths. When experienced practitioners recommend the SAD method, it is usually a case of "Do as I say, not as I do'. 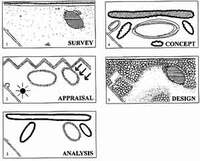 Fig 13.3 The modernist Survey-Analysis-Design procedure, as used in the 1970s 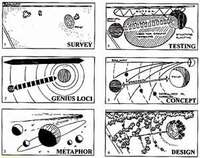