River planning used to be a very easy matter (Figure 6.10). In urban areas, there were four stages to the procedure. First, river banks were strengthened with retaining walls. Second, river beds were concreted over. Third, roof slabs were constructed on top of the retaining walls, to make box culverts. Fourth, the entire river was incarcerated. These measures helped to prevent flooding in some places. There were, however, four drawbacks to the procedure. First, it was inordinately expensive. Second, it killed the river and degraded the environment. Third, it reduced dry-weather flows and prevented underground aquifers from being re-charged. Fourth, it caused flooding in other areas. In view of these problems, the historic approach to river planning fell into disrepute. A new approach developed, which can also be formulated as three principles.

First, water should be detained close to where it falls, to even out the rate at which it enters watercourses. Second, water should be infiltrated wherever possible to underground aquifers, so that it does not enter river systems. Third, rivers should be allowed to flood, in areas that have been planned for this purpose. The new approach is better from almost every point of view. It is more effective, environmental, reliable, economic, sustainable, biological and beautiful. But it does require the cooperation of engineers, architects, town planners, recreation planners, habitat managers, farmers and foresters. Each group needs to make its own plans, and each has information requirements. A web-based plan is the best way of drawing everyone together.

The primary requirement for all river planning is information about water. Everyone needs to know how much of it there is, where it comes from, and where it goes to. Time series data are required for:

A past date: information on what happened to surface water before the Industrial and Agricultural Revolutions can be obtained only by estimation, informed by measurements of what happens to rain that falls on ancient woodlands and grasslands.

The present day: information can be obtained by monitoring and measuring the areas of impermeable, semi-permeable and permeable ground surfacing. This can be related to soils, borehole information, rainfall statistics and other hydrological data. A GIS database can be of great assistance in collating and analysing the data.

A future date: predictions can be made for a time when current plans for surface water detention, infiltration and planned flooding have been implemented.

Planning future surface water movement patterns is not a matter of returning to the past, though lessons can be learned. The bad old days saw great floods, with consequent loss of life and property, often recorded by dates and marks on ancient walls and bridges. The best way to diminish floods is to detain and infiltrate water as near as possible to the point where it falls. This is described as "source control', because it involves controlling flood waters at source.

The flood control section of a river CDP should contain data on the past, present and future. This will give planners an idea of what is possible. Simulations can map the behaviour of flood waters at each of the three time periods. Old paintings and photographs should be included on the CDP, as should literary descriptions of the river. All this data should be spatially indexed, so that users can click on a point and find out about the river's recorded history and possible future. Some of the illustrations will show an Arcadian past. Others will show horrific floods or filthy sewers. Next, there should be photographs of the river as it is today. Quite often this will just be a dotted line on a map, marking the presence of an entombed watercourse. Users should be able to pick this line on the screen to find what is beneath the surface, and how the flow varies in periods of high and low rainfall, what plans have been made for reclaiming the river, by river authorities, municipalities and conservation groups.

Plans for the future should be visionary. Flood control is not the single objective of river planning, though one easily might gain this impression from books and articles on river engineering. Some of the other objectives, and the ways in which a good river CDP might help, can be conceived as follows.

Sacred planning. Reverence for the works of Nature is a historical characteristic of many great religions. It is gaining strength and may, in time, take its place alongside the traditional dimensions of religion: ritual, mythology, doctrine, ethics, social customs and religious experience. Because it is essential to life on earth, water has symbolic power. It would be fine if rivers could be shown on maps as sacred places, to be kept clean, healthy and beautiful for the sustenance of life on earth. Certainly, the river CDP should contain information on the sacred aspects of water, together with music and art owing their inspiration to water.

Flood detention. Instead of being waterproofed with roofs and pavings, the surroundings of rivers should be designed like sponges, to soak up water and release it gradually. River CDPs should contain plans and construction details for this technology, including vegetated roofs, porous pavements, wet ponds, dry ponds, soakaways, swamps, bogs and floodable landscapes.

Recreation planning. Recreation re-creates the body and the mind when they are jaded or tired. Rivers can assist. Everyone should be able to drink and bathe in the waters. This cannot be possible in all rivers at all times. It must be possible in some rivers at all times. River CDPs should provide information on the existing and proposed situations.

Visual planning. Rivers need visual plans. Spatially, rivers have the potential to be strongly integrative features. In towns, this role can be compared to that of a dominant theme in an orchestral piece. Separate reaches of a river can be treated as allegro, andante, legato, staccato, crescendo and diminuendo. Rivers are fascinating in time of flood. As with other riparian characteristics, the visual section of the river CDP should contain studies of the past and the present, linked to plans for the future.

One of the reasons for assembling all the river planning data on a CDP is that plans can be implemented only with wide support. Individual schools, households, road engineers and factory owners must work with planning authorities to improve the river environment. Administrative control through environmental assessment can help. But as in the army, or any other organization, grim regulations are unable to take the place of inspired leadership. Statutory plans must be led and accompanied by non-statutory plans. Managers do things in the right way; leaders say what is right. We need management plans and leadership plans. 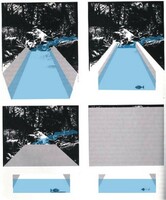