The winner of the twentieth century's most important park design competition was announced in March 1983. Landscape architects were stunned. Not only was it as if a major architectural competition had been won by a landscape designer, but Bernard Tschumi's winning scheme, was not, in their eyes, a spatial design. The Crystal Palace struck architects in a similar way. It was designed by a gardener, Joseph Paxton, and many architects did not regard the scheme as architecture. "If this is a landscape design', one could hear the landscape designers thinking, "then pink atoms will learn to yodel'. Now that Parc de la Villette is substantially complete, one can see that it was a landscape design, and that alternative readings of the scheme are possible. Several will be sketched in this essay. Whether or not they appertain to the designer's intentions is, of course, strictly irrelevant in deconstructionist theory. As Derrida put it, Il n'y a pas de hors-texte. The readings have subtitles. The order is random.

This essay was written in 1994 and the photographs were mostly taken in 2004. The park has matured but continues to be criticised, notably by the Project for Public Space. This organisation was founded by perhaps the most enlightened landscape planner of the twentieth century: William H Whyte (author of The Last Landscape, 1968 The Social Life of Small Urban Spaces, 1980, and other books). Parc de la Villette has a completely undeserved place on the PPS list of the World's Worst Parks. At a guess, I'd say London has a dozen parks of similar size which better deserve a place on this list. But if one restricts the choice to large modern parks in European capitals, who can think of a worse example than Parque Juan Carlos I in Madrid? Spain wins the contest. 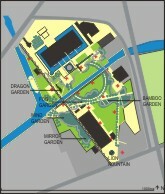 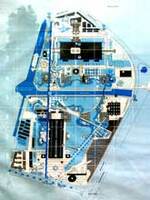 Plan of Parc de la Villette with the reflection of a tree, and some problems distinguishing water from grass 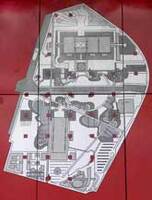 Plan of Parc de la Villette, emphasizing the red follies and the designers left-wing credentials. Note that the plan is cardinally disorientated (North is at about 2 pm) 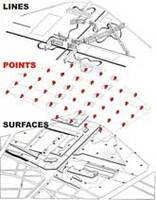 Diagram of Parc de la Villette, to show how it was conceived as Lines, Points and Surfaces