By 1980, the Ford Motor Company itself was losing huge sums of money and market share, especially to Japanese competitors. Selected Ford managers were sent to Japan with sharp pencils and notebooks. They bought a stake in Mazda and discovered that the Fordist system of mass production, named after their founder, had been overtaken by a new system, which came to be known as lean production. Compared with mass production, it required 40% less effort and resulted in products of superior quality. The Ford Motor Company adopted as many lean production principles as it could. Since then, people have been talking about post-Fordism in the same breath as postmodernism. Reflecting on how the company changed between 1980 and 1990, Ford's director of strategy observed that:

We had to stop designing cars we liked and start designing cars the customers liked. The Japanese had teamwork. We had macho designers who found it difficult to sublimate their own ideas to the new realities. (Sunday Times, 1994)

The design teams brought rough and smooth hands together.

Between 1960 and 1980, Japan's share of world automobile production rose from 3% to 30%. Initially, Western companies attributed the growth to low wages and hard work. No doubt these factors played their part but, eventually, it became apparent that the main factor was their new approach to planning, design and manufacture. Lean production is lean in the use of energy, time and materials. Parts are delivered Just-in-Time, instead of being stockpiled. Manufacturing faults are identified at once and the cause is traced. Operational faults are reported to the factory and the cause is traced. Production workers, salesmen and consumers all participate in the ongoing task of product improvement and design. Thought, by everyone involved, takes the place of waste.

The MIT study of car manufacture, on which the above account is based, also looked at the design and planning process (Womack, 1990). The following differences were found between the two systems.

In a lean production company, the MIT team asked to meet one of the directors, at the Honda plant in Ohio. "He was unavailable, we were told: he had just joined the company and was busy assembling cars' (Womack, 1990). In a mass production company, the MIT investigators found an engineer who had spent his whole career designing doorlocks without ever learning how to make a doorlock. Even knowing how to make doorlocks was the job of another engineer - not a craftsman. The large initial size of the lean design team signifies the assembly of knowledge, both practical and theoretical. The small initial size of the mass production design team signifies the focus on abstract knowledge.

The leadership role is crucial. In lean planning and design:

The shusa is simply the boss, the leader of the team whose job it is to design and engineer a new product and get it fully into production. In the best Japanese companies the position of shusa carries great power and is, perhaps, the most coveted in the company. True, employees may seek the position as a stepping-stone to the top. However, for those who truly love to make things, the job brings extraordinary satisfaction. In fact, it's the best position in the modern world from which to orchestrate all the skills needed to make a wonderfully complex manufactured product, such as the automobile, come into being. One might even say that the shusa is the new supercraftsman, directing a process that now requires far too many skills for any one person to master... in an era when the skills involved are not so much technical as social and organizational. (Womack, 1990)

Lean design has similarities to the way in which medieval cathedrals were made. A powerful master-craftsman controlled the whole project, while specialists had power to decide upon and regulate their own work. This is one of the things that Ruskin and Morris admired about medieval architecture. They hated industrialization, but as factories become more automated, the whole production process may become more like cathedral building. When the ultimate black-box factory is built, the lights will be switched off, the machinery switched on and the plant left to churn out products so long as they are wanted.

Ford bought a stake in Mazda 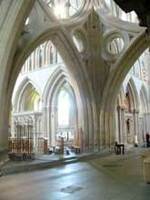 Medieval cathedrals were produced by teamwork, but without design drawings

Teamwork can be a warlike activity