19.5 A portrait approach to garden design

How then should designers give meaning to gardens? It is much easier to answer the question for private than for public gardens, because one knows the users. The design process, for private gardens, is akin to portrait painting. The completed work should be an outward manifestation of the owner's interests and character. Functionally, this principle has become a staple of garden design books. One reads with pleasure of the plantswoman's garden, the conservationist's garden, and the sculptor's garden. As this is a simple and obvious policy, it need detain us no longer. Aesthetically, the challenge is greater. Some people will paint self-portraits. Others will need professional help.

Let me begin with my own gardening activities, which are few. As a country-loving person, it was with some reluctance that I moved into London. The view from my study did not improve my spirits. It was over a dull flat roof to a varied roofscape beyond. To make a mountainesque roof garden, a thin layer of peat and sand was spread on the flat roof and sown with grass seed collected from mountain and shore. It has grown into a soft carpet of fescues, which is never cut (Figure 19.7). In early spring, it is a flower meadow. In summer, it bakes to golden brown. Fresh shoots come in the autumn. To my eyes, it is always a mountain, taking me to where I would like to be.

The other garden I have made in recent years is in the country. As the place is lovely, it would have seemed wrong to bring in hard materials from afar. All were collected in the local area. Red sandstone and grey cobbles were found in and around the garden. A very suitable red building sand, of similar geological age to the sandstone, came from a quarry 5 km away. Most of the effort went into laying cobbles. There is a local tradition for this, which has died out but which I admire. Progress is slow, but, as with knitting, the pleasure is more in the doing than in the completion (Figure 8). The children contributed a story, which helped to interest them in the project. It centred on a stone they found, with a remarkable swirling pattern. They called it The Moonstone:

One night when the moon was new, a boulder whizzed out of a crater. After circling the moon, twice, it noticed a green and blue planet shimmering in the distance. "Ha Ha,' thought the Moonboulder, "there's a pretty sight.' On its way to Earth, the boulder spun round and round. Its colours swirled, ran together, and set. After six days it reached the Earth's atmosphere. Suddenly it met a fearful pressure and burst. Four million coloured stones fell into the sea. Fish took them as jewels. Moonstones were carried far and wide across the ocean. Some washed ashore, to become beautifully smooth as the waves rolled them back and forth. One stone, shaped like a heart, was carried up the hill by some children. It was called The Moonstone and placed at the centre of a path. Neat grey stones took their place in serried ranks. A troll came from Norway, made his home in the garden, and smiled every time he saw the Moonstone.

The gardens I have helped to make portray aspects of my life. How could a comparable procedure be used to design a garden for someone else?

Take the case of a woman who wants a garden as a like-minded companion. She goes to pottery classes, loves terracotta, admires the Art Nouveau period and lives in Barcelona. A design could build upon these interests, and Barcelona would be the best place for it to happen. Despite the wonderful example of Parc Guel, few Art Nouveau gardens have been made. Yet the idea was rooted in plant forms and used flowing lines, which are rich veins for the design imagination, deserving to become one of the classical orders in garden design, as the Doric and Corinthian have been for architecture. One can imagine a Catalonian garden with lines flowing out from the dwelling to entwine the garden. Glazed ceramic tiles would define the garden's structure, as paving, walling and fencing. Decorative motifs would record incidents from the family's history. Flowers would complement the tiled colours and patterns of the layout. The garden would be full of meaning and a work of art.

Iceland is also an interesting place to make gardens. It was once very poor and is now very rich. As with many countries that gain new wealth, the first idea, especially under the influence of the Modern Movement, was to imitate other rich countries. In gardens, this led to the use of European plants and relatively meaningless abstract forms. The idea now gaining ground is to look to indigenous traditions. The most dynamic and dramatic local characteristics come from the landscape itself. This is the land of ice and fire, of black basalt, mosses and lichens (Axelsson, 1994). Cold winters produce ice. Volcanic activity provides warm water and cheap electricity. The cultural tradition is Nordic, but unique to the island. Taking these factors together, one can think about making very special gardens. In summer, they should provide for sheltered outdoor living with warm water pools. In winter they could be spectacular illuminated dioramas to view from within. Aesthetically, the gardens should respond to their owners' tastes and preferences, remembering that if Icelandic design traditions are not to die, they must be carried forward. 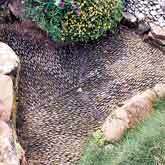