A time can be imagined when humanity becomes so urban that the biological memory of a pre-urban existence begins to fade. But that time is millennia away, one hopes. Human societies retain a deep love and longing for rivers and oceans, fields and forests, wildness and wet. This demands satisfaction. How? Some primordial tastes can be satisfied in public open space.

Freud said the basic human instincts were "sex and aggression'. He forgot about food, possibly because his wife prepared it. This is how we can cater for basic needs in parks:

Aggression can and does find an outlet in competitive sport.

Sex can find some accommodation in a Park. Dancing is said to be the vertical expression of a horizontal idea. Perhaps sunbathing is the passive expression of an active idea. People enjoy taking off their clothes, lying in the sun and being with others who behave in a similar same way. Where can they go to do this in the city? Two conditions must be satisfied: there must be some water that they can think they are going to plunge into; and there need to be many secure niches, for the first people to undress. When everyone does so, it becomes an inconspicuous activity. Jane Jacobs talks about a Pervert Park (Jacobs, 1962). One assumes this is a politically incorrect reference. But why shouldn't homosexuals have their own park, if they wish it? Nudist beaches have some tendency in this direction.

Cooking is one of the defining aspects of a civilized society. I wish there were places to cook out of doors in English parks, as there are in German parks. It would not be right for every park, but it would be a fine activity for some parks.

Hunter-gatherer instincts: Humans have spent longer as hunter-gatherers than as city dwellers. The instincts developed during that time are not easily forgotten. But they have little accommodation in urban parks.

Britain had a vigorous campaign against fox-hunting. I sympathize with the objectors, but if hunting is to be banned, there must be other outlets for the hunter instinct.

Fishing is immensely popular. If it is not to be banned as a blood sport, it should be accommodated in urban parks.

It is a great pleasure to walk through the woods, gathering firewood, nuts, blackberries and mushrooms.

When salmon are caged in fish farms, one imagines that their instinct to roam the ocean is cruelly frustrated. Perhaps humans suffer in a similar manner when denied opportunities to hunt and gather their own food. 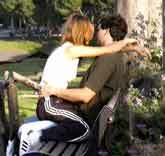