Take the case of London's rivers. Neither town planners nor river engineers have sufficient knowledge, sufficient power or sufficient wisdom to produce the necessary plans. Most rivers have therefore been culverted, channelized and degraded into open sewers by those with the big budgets (Figure 7). Watercourses now need massive reclamation programmes, to bring them back to the dignity of rivers. Some work is being done on making them into nature reserves, which is not enough. River planning requires cooperation between many bureaucracies and voluntary bodies. Britain's National Rivers Authority cannot do its job without the help of community groups and planners. A time must come when Barton's heart-rending book, The Lost Rivers of London (Barton, 1962) will be followed by its necessary sequel: How we won the rivers back. The River Thames must be rejuvenated. As in days of yore, and Canaletto, it should be crowded with animals, small boats, traders, floating restaurants, flowerships and ferries (Figure 2.7). There should be beaches and habitats on the banks. This requires multi-purpose planning and non-statutory planning, extending well beyond the margins of the river. The Pool of London, once the greatest port in the world, now almost dead, should be declared a waterpark and nature reserve. Open spaces need not be dry.

Specialist planning and design teams can be led by artists, planners, businessmen, architects, poets, landscape architects, politicians and surveyors. Alternative planning and design methods should be employed, according to circumstances. Extensive community, private and voluntary planning should take place, not mere "public participation in planning'. Wise plans, which may conflict, will be required: some for rivers, some for greenspace, some for pedestrians, some for boroughs, some for groups of boroughs, some for street corners, some for London, some for the Dover to Bristol Edge City, some for the Calais-Folkestone Economic Zone, some for the areas around suburban stations in Washington DC. Planning competitions and exhibitions should be held, with prizes. Assistance from professional planners will be required. All the plans should be stored in geographical information systems.

Countries are unlikely to get plans of the necessary imaginative quality from downtrodden bureaucracies, even if their staffs contain brilliant and committed people, as they undoubtedly do. The fatal disease, which Parkinson named Injelititis, overwhelms forward planning departments. The inventor of Parkinson's Law named the disease and proposed a cure:

No portion of the old and diseased foundation can be regarded as free from infection. No staff, no equipment, no tradition must be removed from the original site. Strict quarantine should be followed by complete disinfection. Infected personnel should be dispatched with a warm testimonial to such rival institutions as are regarded with particular hostility. All equipment and files should be destroyed without hesitation. As for the buildings, the best plan is to insure them heavily and then set them alight. Only when the site is a blackened ruin can we feel certain that the germs of the disease are dead. (Northcote Parkinson, 1959)

He exaggerated, no doubt. But it is only by drastic means that the regeneration of "town' and "country' planning will be accomplished. Far-sighted and imaginative plans require a shusa. This was Abercrombie's role in the 1943-44 London plans (London County Council, 1943, 1944). His plan had excellent qualities but fell short through aiming at comprehensiveness.

Planners have felt themselves to be under attack since "one way, one truth' modernism became questioned. My hope is that by producing varied plans that are better, more useful, more client-oriented, and more knowledge-intensive, it will be possible to raise the popularity of planning and, incidentally, to improve employment prospects for planners. As car firms throughout the world adopt the principles of lean planning and lean production, they are producing better products at lower prices with happier staff. Planners and designers need to follow these paths 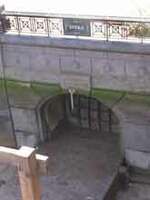 The Effra, one of London's 'lost rivers' joins the River Thames at this point.

2.7 The River Thames has lots its small boats, traders, animals and ferries - through 'planning'.

Canaletto's painting of boats on the Thames at Greenwich (excerpt)