Asked to say what "pattern' means, most people will think first of visual patterns. In a book on The Language of Pattern (Albarn et al., 1974) four Western designers write about their interest in Islamic patterns. As students they "had learnt to regard pattern as superficial decoration of form, and form dictated by function'. In the body of their book, they examine the use of numbers and mathematical systems in design. "Transformation' is used as a term to describe the process of creatively transposing a pattern from one context to another, making use of changes of scale, dimension and viewpoint to generate fresh perceptions. The Vedic Square, an arrangement of numbers (Figure 3.16), was transformed into lines, planes, brickwork, glazed tiles, garden plans, buildings and even town plans. The authors conclude that "patterns structure our thinking, i.e. pattern is the ""structure of mind'', therefore to evolve our knowledge of pattern is also to evolve ourselves'.

Patterns can be created from numbers. The Vedic square is formed on a 9-by-9 grid, with the products of the numbers in the top row and left column placed at each intersection point. When the product exceeds 9, the two digits are added to form a single digit. The completed square exhibits many patterns, such as that formed by the sevens and ones, which can be transformed into other patterns. Much Islamic decoration was generated in this way. 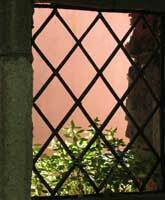