Designers have used pattern books for centuries. The design ideas of the Italian Renaissance circulated in northern Europe by means of pattern books, which influenced metalworkers, plasterers, furniture makers and other craftsmen. Most of the houses in Georgian London were adapted from architectural pattern books. But as nineteenth century romanticism and the cult of the individual reached their heights, it came to be thought that there was something morally disreputable, if not indictable, about "copying' from the work of others. All praise was heaped upon the heroic innovator. Pattern books became despised. 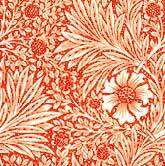