Governments are run by parties. In The Politics of Park Design, Galen Cranz demonstrated the inseparability of parks from politics (Cranz, 1982). Only one government can run a country, but parks can be managed to suit all the political colours. A Capitalist Park would be privately owned and managed. We could expect a high standard of order, and high prices for the attractions. A Socialist Park would have everything run by the people for the people. A Social Democrat Park would have public facilities in public ownership but would use the market economy to run cafes, beer gardens, carousels, rides and other attractions. A Green Party Park would be planned with ecological objectives to conserve the world's resources. In a Cooperative Park, people would work cooperatively for the greatest good of the greatest number. The results could provide an interesting commentary on political systems. 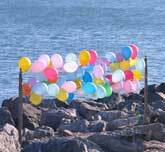 Karl Marx and Frederich Engels in the former East Berlin