History and theory of garden design and landscape architecture > Garden and Landscape Books > Essays on Cities and Landscapes by Tom Turner - contents list > 18.6 Parc de la Villette, Paris, as a work of art

The plan of Parc de la Villette bears an uncanny resemblance to a Russian constructivist painting. One remember's Gabo and Pevsner's Constructivist Manifesto:

We reject the closed spatial circumference as plastic expression of the moulding of space. We assert that space can only be modelled from within outward in its depth, not from without inward through its volume. For what else is absolute space than a unique, coherent, and unlimited depth?

Tschumi's work moulds space, has overcome the flat surface, and puts us in mind of Iakov Chernikov (as Catherine Cooke demonstrated). The park is an abstract design. It is marvellous to come across a client who is willing to fund such a vast work of art, especially a work in what many had thought was an exhausted style. I would very much like to see a parallel project to deconstruct the Art Nouveau style into a modern park. Gaudi's employment of the style at Parc Guel was a triumphant success. Despite the apparent similarity of the words "deconstruction' and "constructivism' there is no necessary connection between the two fields of activity. As Cooke wrote, "Truly deconstructivist architecture doesn't need to look like this at all'.

The idea of embedding a work of fine art into a real place can itself be given a context. It is known as land art or site-specific sculpture. There are many fine examples in Earthworks and Beyond. But the author, John Beardsley, points out that many artists feel compromised when their work has a function. To a significant degree, Parc la Villette is "art for art's sake', "architecture for art's sake' and "landscape for art's sake'.

With regard to the Russian Constructivist Plan for la Villette, I believe it might have worked better as a paving pattern in a town centre. Shafts of energy could project into the urban fabric, but the fundamental pattern would be recognizable, perhaps using white marble inscribed on black marble, as at the Campidoglio in Rome. At la Villette, the plan is not sufficiently legible. Religious buildings can suggest the numinous in a rich hermeneutic context. At a less exalted level, one recalls that the art of coquetry is "to conceal rather than to reveal', but one has to have a good idea of what is being concealed. 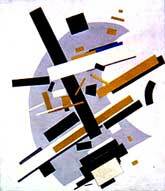