In architecture, Modern Movement is a general term for the new style of the twentieth century. Typically, it used a structural frame of reinforced concrete, in which floors, roofs and vertical supports formed a homogeneous whole. The famous names of this movement included Frank Lloyd Wright, Le Corbusier, de Stijl and the Bauhaus. For the public, modern architecture was as puzzling as modern art. Abstract concepts are not easy to grasp and, because architecture is a public art, those who disliked modern architecture took it as a personal affront. It is one thing to put abstract paintings in private rooms; quite another to build them on street corners where they disrupt familiar scenes. The Prince of Wales encapsulated this feeling with his jibe to the Royal Institute of British Architects that a proposed addition to Britain's National Gallery in Trafalgar Square was "a monstrous carbuncle on the face of a well-loved friend'. 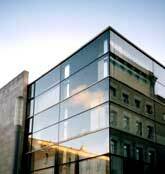 After Prince Charles' intervention in the debate, a modernist design for London's National Gallery Extension was replaced with a design by Robert Venturi (above, center) full of contextual references to the old gallery (above, right). In my view, it was a wise decision.