"Landscape' was coined by adding the suffix -scape to the noun land. This converted a concrete noun into an abstract noun. Always, landscape is abstract. It is delimited by boundaries but it has no substance. Space is continuous extension, emptiness, void. So how can space be designed, planned or structured? By the use of metaphor. Painters once spoke of "taking a landskip', as we speak of "taking a photograph'. The verb "take' is used metaphorically. Taking a photograph removes not one atom from a site, though painters and photographers do practice the arts of selection, composition and invention. Planners and landscape designers, in making spaces bounded by hills, trees, buildings, sky and water, need structural metaphors.

Gordon Cullen, a great analyst of space in towns, conceived Serial Vision as "a tool with which human imagination can begin to mould the city into a coherent drama'. This is a structural metaphor for use in spatial design. After describing an example of serial vision, Cullen invites us to examine what this means:

Our original aim is to manipulate the elements of the town so that an impact on the emotions is achieved. A long straight road has little impact because the initial view is soon digested and becomes monotonous. The human mind reacts to a contrast, to the difference between things, and when two pictures (the street and the courtyard) are in the mind at the same time, a vivid contrast is felt and the town becomes visible in a deeper sense. It comes alive through the drama of juxtaposition. Unless this happens the town will slip past us featureless and inert. (Cullen, 1971)

Notions of "pictures', "drama' and towns being "alive' contribute to the serial metaphor. Walking through a town can be like flicking through a dramatic picture book. Cullen also spoke of the spaces that contained the pictures as being "articulated':

... instead of a shapeless environment based on the principle of flow, we have an articulated environment resulting from the breaking-up of flow into action and rest, corridor street and market place, alley and square.

"Articulate' comes from the Latin for "jointed'. Designers have found the idea very useful. But it is only a metaphor. Patently, it is not possible to design a town without having a series of views, or joints, between successive spaces.

The Tree of Life has been a significant symbol since ancient times, and can still guide spatial planning. Jung believed that the tree symbolizes the growth and development of psychic life, as distinct from intellectual life (Smith et al., 1989). The Tree of Life represents humanity's undying sense of being part of a continuous process, which extends from our distant past into the life hereafter. One finds the Tree of Life in manuscripts, in textiles and in architecture. In the Bhagavad Gita, for example, "They speak of an imperishable tree with its root above and branches below. It leaves are the Vedas; he who knows the tree, is the knower of the Vedas' (Smith et al., 1989). A good king was one who planted trees along the sides of the roads to provide shade. Abercrombie's open space plan for London might have gained strength from being conceived as a Tree of Life. Individuals and community groups could think that they were adding branches, leaves and roots to the tree.

Anthropomorphic metaphors can also be used to plan spatial relationships. A path can be thought of as kissing a hill. The hill can hold a conversation with another hill. One of the two hills can be clad with a forest. The edges of the forest can be frayed or cut on the bias. A town might crown the hill or march through a valley. Anthropomorphic metaphors help people relate to places. Longer metaphors, in the form of stories, allow more sophisticated relationships:

The Smugglers Path, after dawdling in a Tolkienesque wood on the hill's flank, descended into the bowels of the earth, breasted the mountain wall and plunged towards the sea. It then doubled back, clung to the cliffside for two furlongs and came to rest in a secret harbour.

Since the coast was a place of danger, the farmers had chosen to build their village on the plain. After a long search the founding fathers came across a slight knoll which they appointed the site for a church and meeting house. All later buildings nestled beside the church. The village became a ship, billowing across the open wheatfields with a church spire for a mast and trees for sails.

In planning, the boundaries between myth, history and fiction are not so consequential as one might think. Beauty may reside in the eye of the beholder, but what we see is determined by what we expect to see. 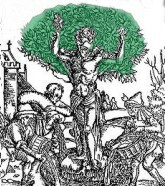 A European Tree if Life

A path can be thought of as kissing a hill 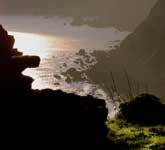