Winston Churchill relished large-scale metaphors, and used them to manipulate large-scale concepts. In 1942 he saw the south shore of the Mediterranean as a springboard for an attack on "the soft underbelly of Europe' (Figure 7.2). The idea was almost sexual. In 1946, he told an American audience that "An iron curtain has descended across the Continent'. This metaphor framed the Cold War period, from 1946 to 1989, and may have inspired the Berlin Wall. Churchill, like most English authors, admired the master of metaphor, William Shakespeare. Shakespeare often created new words by fusing older words, so that the meaning "carried over' from one to the other, as in "homekeeping'. Of Anthony and Cleopatra, he wrote that "he ploughed her and she cropt' (II ii 232). Shakespeare also created metaphors that coloured Churchill's, and many others', view of their native land:

This fortress built by Nature for herself
Against infection and the hand of war,
This happy breed of men, this little world,
This precious stone set in the silver sea,
Which serves it in the office of a wall,
Or as a moat defensive to a house,
Against the envy of less happier lands,
This blessed plot, this earth, this realm, this England,
This nurse, this teeming womb of royal kings.

A fortress; a precious stone; a blessed plot; a nurse; a mother: these metaphors have had a profound influence on Britain's strategic planning.

Dinocrates, according to Vitruvius, greatly impressed Alexander the Great with a metaphorical planning concept:

I have made a design for the shaping of Mount Athos into the statue of a man, in whose left hand I have represented a very spacious fortified city, and in his right a bowl to receive the water of all the streams which are in that mountain, so that it may pour from the bowl into the sea.

Alexander, readily perceiving that there was no agricultural land in the neighbourhood, replied:

For as a newborn babe cannot be nourished without the nurse's milk... a city cannot thrive without fields and the fruits thereof pouring into its walls, nor have a large population without plenty of food, nor maintain its population without a supply of it. Therefore, while thinking that your design is commendable, I consider the site as not commendable; but I would have you stay with me, because I mean to make use of your services.

Together, they founded the city of Alexandria, because of its harbour, its cornfields and "the great usefulness of the mighty river Nile'. Good metaphors attract good patrons and may produce great cities.

John Bunyan, in the Pilgrim's Progress, used landscape as a metaphor for life (Bunyan, 1678). The hero, Christian, has a dream in which he learns of his hometown becoming a City of Destruction. This caused him to depart on a pilgrimage through a series of metaphorical landscapes: the Slough of Despond, the Palace Beautiful, the Valley of the Shadow of Death, the Doubting Castle, the Delectable Mountains and the Celestial City (Figure 3). Artists have transformed these images from poetry to pictures. Finding Cities of Destruction all over nineteenth century Europe, idealist planners dreamed of replacing them with Celestial Cities. Then they looked for sites.

The Garden City, as devised by Ebenezer Howard, fused the ideas of garden and city to create a practical proposal for making Celestial Cities in England's green and pleasant land. Howard dreamed of:

...so laying out a Garden City that, as it grows, the free gifts of Nature -- fresh air, sunlight, breathing room and playing room -- shall be still retained in all needed abundance, and by so employing the resources of modern science that Art may supplement Nature, and life may become an abiding joy and delight. (Howard, 1946)

A garden is a place of safety, of beauty, of production, of harmony between man and nature. A garden city should, therefore, have these qualities and also the urban advantages of clean streets, good pay and access to education and culture. This idea was illustrated with the Three Magnets metaphor (Figure 7.4). In Shakespeare's time, cities were centres of trade, power and defence. Howard dreamed of Garden Cities in which people could live, work, play and grow food. His arguments have been accepted to the extent that planners have tried to make cities more like gardens, by making open space planning an aspect of city planning.

Another famous town planning concept, the Finger Plan for Copenhagen, was based on a metaphor and shown by a diagram, of a great hand resting over that city (Figure 7.5). Since 1947, that great hand has guided Copenhagen's development. The merchant's harbour, after which the city was named, sits in the palm of a guiding hand. Fingers point ways to new development. Power lines, telecom lines, and rapid transit lines follow the bones, arteries, veins and nerves of the fingers. Between those fingers we find the green land of Denmark. Copenhagen was made into a garden city but the hand itself, of urban development, was grey.

Geometrical metaphors have been important in city planning and regional development. Planners speak of grid cities, radial cities and organic cities, though it is only the street patterns that have these characteristics (Figure 7.6). The low part of Holland is seen as a ring city, or randstadt, with a green heart. Transport corridors are seen as growth poles. The benefit of these metaphors arises from the help they give to planners in thinking about large and complicated issues. Disbenefits can arise when issues become over-simplified. A city should be so much more than a street pattern; surrounding countryside should be so much more than a "green' belt. Road plans do not show the city structure: they show one of many structures. 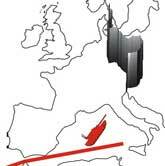 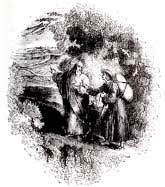 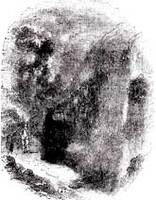 The valley of the shadow of death 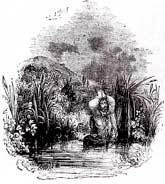 The slough of despond 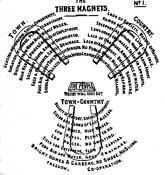