History and theory of garden design and landscape architecture > Garden and Landscape Books > Essays on Cities and Landscapes by Tom Turner - contents list > 13.3 Imitation of Nature

Before 1800, landscape design was firmly based on the Ideal Theory of Art. Practitioners used the Neoplatonic axiom that "art should imitate nature'. John Barrell, to whom Hunt directs our attention, gives an illuminating account of the theory of painting between the early eighteenth and early nineteenth centuries (Barrell, 1986). It parallels, in several dimensions, the evolution of landscape theory. Shaftesbury, writing in 1711, was troubled by Plato's criticism of painting, that it tends to destroy the rational part of the mind. Shaftesbury believed that painting should have a public role in fostering virtuous behaviour. He thought history-painting the genre most likely to achieve this goal, because it can represent the universal ideals of virtue and heroic action. A century later, after 1800, it was thought that the painter's aim should be to engender private satisfaction, rather than public virtue. The general interpretation of the Neoplatonic axiom, that "art should imitate nature', had changed. Sir Joshua Reynolds, in the Discourses delivered to the Royal Academy between 1769 and 1789, held to the classic, but waning, eighteenth century view:

...the great style in art, and the most PERFECT IMITATION OF NATURE, consists in avoiding the details and peculiarities of particular objects. (Barrell, 1986)

William Hazlitt, in a group of essays published circa 1816, held a contrary view, that one can show general truths only by representing the particulars:

...the highest perfection of the art depends, not on separating, but on uniting general truths and effect with individual distinctness and accuracy. (Barrell, 1986)

Both writers believed that artists should "imitate nature', but they differed in their interpretations of "nature'. For Reynolds, nature meant the ideal world of the Platonic forms. For Hazlitt, nature was far closer to the world of empirical reality, which included "both masses and details'. Their interpretations are the consequence of an epochal swing, from classicism to romanticism, from rationalism to empiricism, from universalism to individualism. The change caused a profound crisis for landscape theory.

The Neoplatonic axiom had borne especially rich fruit for landscape design during the eighteenth century. As the predominant interpretation of "nature' changed, the arts of garden and landscape design could not do other than change with them. Plan styles became progressively less regular, as shown in the upper part of Figure 13.1. The eighteenth century was a period of dynamic stylistic evolution. In 1700, the predominant sense of "nature' in garden and landscape design derived from Plato's Theory of Forms. "Nature' meant "essence', as it still does when we speak of "the nature of the case'. Imitating nature meant mimesis of the Platonic forms. As the most perfect forms were considered to be the sphere, the circle, the cube and the square, it was necessary to base the most perfect gardens on these shapes. Honselaarsdijk, in Holland, was the finest flower of Platonic idealism in garden design. In 1700, any young man setting out to "imitate nature' knew that he must look "upwards' to the world of ideas. This provided an eminently workable theory. During the nineteenth century it suffered three fatal blows 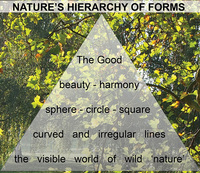 Plato Theory of Forms is often thought to imply a geometrical hierarchy from the Form of the Good to the Forms of the natural world (illustration from British gardens:history, philosophy and design p. 223)

Fig 13.1 (above)1800 saw a Great Turning Point in the history of garden design - when the ancient theory that 'art should imitate nature' almost from the impact of Three Stakes (Fig 13.2, below) driven into its heart: Empiricism, Geography and Functionalism. Its heart of landscape theory is represented by Repton’s trade card.