History and theory of garden design and landscape architecture > Garden and Landscape Books > Essays on Cities and Landscapes by Tom Turner - contents list > 4.8 Planning a group of houses

4.8 Planning a group of houses

Apparently, this is an extremely difficult task. Nobody much wants to live in a "housing tract', a "housing estate', a "housing project' or a "subdivision'. They are especially disliked by the planners and designers who make such places, and who are slightly to blame for their repetitious horror. Most of them would rather live in real country or a real town, or to have a front door on the town and a back door on the country.

Many of the errors in housing layout result from the use of bad archetypal patterns. Finance companies have fixed ideas on what sorts of houses will hold their value. Highway engineers have rigid patterns for the layout of roads. Zoning regulations impose severe restrictions on land use. The fire service and the refuse collection service have immutable procedures for vehicular access to dwellings. Houses come to be laid out like dominoes beside roads, with the position of each dwelling fixed either by its predecessor or by the road, in absolute disregard for the spaces between the dominoes.

If the archetypal patterns for housing were good, they could be reused. As few are, it may be better to start with another class of pattern. Any of the three can be used. Natural patterns can be a superb starting point, as instanced by the following examples: houses built into an existing woodland, earth-sheltered housing fitted into a hillside, swampland housing with an ecological drainage system, arid zone houses grouped for defence against the sun, coastal housing designed for defence against the wind. Ideally, each neighbourhood should be associated with a topographic feature: a hill, a wood, a valley, a stream, a habitat, an orchard. If there is a pond on the site, let it be preserved as the heart of the layout. If there is no pond, make one: it is easy to group houses around water.

Social patterns also provide good starting points for housing, provided they relate to the actual tastes and preferences of those who will occupy the houses. Different housing layouts can provide their occupants with good gardens, good views, high security, good communal spaces, good provision for home extensions, good space for running a home business, good access to schools, shops, recreation or transport. One cannot have all these things in a single neighbourhood, but one can have a much wider choice of neighbourhood types than is available in mass housing. Ideally, each house and each garden should be planned in relation to its future occupants.

Aesthetic patterns are also important. Gordon Cullen emphasized the design of space in urban areas, which he called Townscape (Cullen, 1971). For house-buyers, it is often the built elevation that is more important. Some prefer traditional dress and traditional houses. Others prefer modern dress and modern houses. It is a question for context theory whether traditional and modern dwellings should coexist in one neighbourhood. The fact that both types have a right to exist is beyond dispute, surely. Aesthetic patterns can also be used to create harmonies of colour, texture, mass, shape, rhythm and other visual characteristics.

Alexander proposes a range of archetypal patterns for use in housing layout. The following are my favourites:

35. Household mix. "Encourage growth toward a mix of household types in every neighbourhood, and every cluster, so that one-person households, couples, families with children, and group households are side by side.'

40. Old people everywhere. "Create dwellings for some 50 old people in every neighbourhood.'

48. Housing in between. "Build houses into the fabric of shops, small industry, schools, public services, universities -- all those parts of cities which draw people in during the day, but which tend to be ``nonresidential`.'

In the above pattern-descriptions, the passage in quotation marks is taken from Alexander's solution paragraphs. In my opinion, these patterns could lead to great improvements on the present arrangement of mass housing. 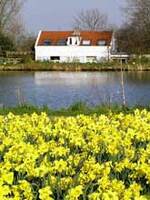