Red commuters takes their name from the red eyes, the blood and the environmental balance sheet which is reddened by commuting in private cars. Red commuters inflict many injuries on themselves and others, while the cities they inhabit are made less sustainable. Green commuters travel on foot, bicycle, roller skates, or whatever, without imposing social costs on cities. Such behaviour needs to be encouraged. It saves energy. It avoids pollution. It makes cities more sustainable. A 1 mile walk to work needs only the energy supplied by one slice of toast, without butter or marmalade. Travelling the same distance by car takes energy equivalent to 40 slices of toast for propulsion alone. By train, it takes 17 slices. Green soap powder is widely available. Green commuting is not. Red commuters hold all the trumps, at present. Each year they have more cars, more roadspace, more places to park their vehicles. Billions are spent on new bridges, tunnels, junctions and bypasses, which move bottlenecks but rarely cure them. Part of the reason for the reds' claim on the public purse is that roads are also used for the transport of essential goods. Car commuters are interlopers.

In most cities, green commuters are a neglected underclass, grateful for the odd bean chucked in their direction, but always yearning for a wholesome meal. When pedestrian bridges are built, they usually remove an inconvenience from road users, and make the pedestrian walk further. When cycle routes are planned, they usually go beside busy roads, or through bumpy back streets which make the cyclist peddle further. Carrots and sticks should be used to encourage green commuting. Road pricing, restrictions on access and limitations on car parking can be used as sticks. But after years of chewing old bones, green commuters dream of carrots.

The first Great Carrot would be a network of direct and environmentally pleasant routeways. It should be conceived as a second public realm. The first public realm, of vehicular roadspace, is as old as the wheel. Some roads are suitable for joint use by vehicles and pedestrians. Much depends on traffic flow. If a road has 500 vehicle movements per day, it can be reasonably pleasant for pedestrians. If there are 5000 movements per day, it not pleasant. If there are 50 000 movements per day, it is intolerable. For a really enjoyable walk to work, one does not want to be a second-class citizen on the edge of a road, subject to noise and fumes. Green commuters need a safe realm of pedestrianized public space. It should extend through parks, beside rivers, across urban squares and along pedestrian streets.

The second Great Carrot would be a network of cycle routes. Too many wives drive their husbands to the station and an earlier grave. Surely, ten minutes of useful exercise is better than ten wasted minutes on an exercise machine. Trains are more punctual than buses, and a cycle ride followed by a train journey and a short walk can be pleasanter than time spent in red commuting, and faster. If one has catch a bus to catch a train to catch a bus, then over 30 minutes have to be allowed for missed connections. Depending on traffic volumes, cycle routes can be shared with pedestrians or motor vehicles or both. As few of us are willing to cycle or walk more than 30 minutes, green routes should be planned in conjunction with bus and train routes.

The bicycle works best as a feeder system for bus and rail transport systems, which are most economic in high-volume corridors. This requires excellent cycle storage facilities at bus and rail stations. Trains need high passenger volumes to be economic. Buses also need high passenger volumes, and are too slow if they snake about to collect passengers. It can make a bus journey take five times longer than the equivalent car journey. The solution is to plan commuter transport on a "stars and stripes' basis (Figure 6). The stars should be feeder paths for cyclists and pedestrians. The stripes should be linear bus and train routes. At the centre of each star there should be safe and secure cycle stores, cafes, shops, shelters and delightful gardens in which to sit to wait. Exotic forms of transport could also be interconnected. In Canada, some commuters travel by ice skate in winter and kayak in summer. In Britain, long-distance bridleways, and stables, would make it possible for some to commute on horseback. Others could use roller skates, as in Barcelona.

Eco-cities, with green transport systems, would meet the needs of the young, the old, the poor and the dispossessed. Lonely walks are dangerous. There is safety in numbers. Well-used walks and traffic interchange points enjoy the benefit of visual policing, and are safe from the danger of drunk drivers, joyriders and runaway trucks.

Provision for green transport costs money. It should not be done on the cheap. If the percentage of commuters who travel by bicycle is to rise towards 30%, as it has done in Freiburg (Vidal, 1994), then the allocated proportion of the transport budget should rise in the same ratio. Indeed, after years of neglect, there is an unchallengeable case for spending way above the 30% budget for a decade. We should allocate 100% in the first year. Some first-class examples of beautiful, safe, convenient green transport routes could revolutionize the received wisdom on transport planning and design. At some point we may be able to have a network of plastic tubes, with blown air assisting cyclists in their direction of travel (Chapter 8 Figure 7, Turner, T., City as landscape, Spon:London, 1996 p 97) and see blog comment on elevated cycle tube veloways. 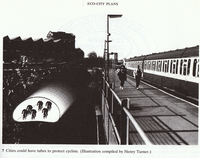 Cities could have tubes to protect cyclists (image by Henry Turner)

Rail stations should be integrated with cycle networks